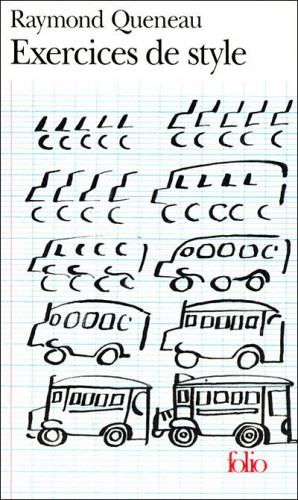 Raymond Queneau’s Exercices de Style (1947) is a useful and engaging text to use in an intermediate language or writing classes. Students at both levels seem to enjoy delving into Queneau’s project – that is, to tell the same story in 99 different ways. It is an example of “contrainte littéraire” – the technique of constrained writing which, among other approaches, the authors in Queneau’s OuLiPo group used as a creative device.

In a unit on the theme of telling stories, in an intermediate class, I used six of the short texts in an exercise where students had to identify the style in which each one was written. I photocopied the texts, covering the titles (6 fit on one page) and then gave them the titles in list form, to match to the texts. I chose “Lettre officielle,” “Passé simple,” “Imparfait,” “Récit,” and “Présent” – forms and tenses we had worked on in class. I added “Anglicismes” for fun: the spelling of words in that text is difficult to decipher until you read it out loud – an excellent exercice in French pronunciation, as you end up sounding like someone with a heavy French accent reading English.  In an advanced course, I would choose more difficult distinctions than verb tenses. “Métaphoriquement,” “Rêve,” “Onomatopies,” and “Animisme,” for example.

Gerald Herman has an excellent article about using Exercices de Style in an advanced writing or creative writing class, where he has students rewrite a text (he uses an excerpt from Camus’s L’Étranger) using Queneau’s method. Read it here. {update 1/17/14: If you are a member of the MLA, you can access the article here.}