Digging through some course materials that have been handed down to me, I came across Alphonse Daudet’s short story La Dernière classe. As is the case with most any short story from the 19th century, this is a great text to use to identify the common literary uses of the past tense (imparfait vs. passé simple): the opening paragraphs are almost entirely descriptive and would illustrate the use of the imperfect as the descriptive tense. It could be the introductory activity for this grammar lesson, or you could take out the verbs and have the students fill them in using the context as a guide. 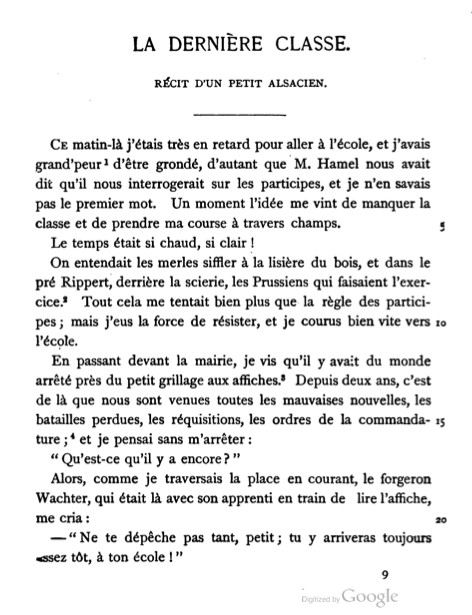 But I wouldn’t leave it at verbs. In fact, I would incorporate this text into a history or French civilisation class: La Dernière classe is an excellent entry into the cultural reverberations of the Franco-Prussian war. The story of a “petit Alsacien” who attends what he soon finds out to be the last day of class with his French maître is Third-Republican patriotism at its best. The teacher who was formerly so frightening to his students incites sympathy and awe in the narrator as he gives a complete lesson in spite of what would seem to be the futility of the effort: the next day and forevermore, all classes would be taught in German. The maître would begin his exile from Alsace. At the end of the day, the imposing teacher is moved to silence as he struggles to find words: “je…je…” and then abandons the ephemeral spoken word for the long-lasting written. He carries out the heroic gesture of writing on the board a final battle cry: “VIVE LA FRANCE!” It’s a dramatic ending akin to that of the Titanic’s band who kept on playing as the ship went down, or military stories of soldiers taking up their flag as their comrades fall in succession. It wouldn’t be difficult for students to find meaning in this text.

La Dernière Classe is easy to follow and short, at only six pages. You can find it online in Google Books here (pages 9-14 – I prefer this 1891 version, as it has line numbers in the margins). It would fit in well as a supplement to other readings on the Franco-Prussian War, or in an intermediate course covering the forms of the past tense.