Google France opened a new headquarters in Paris today – an event which, interestingly, merited a press conference with none other than President Sarkozy and Google’s CEO Eric Schmidt. Given the rocky relationship between the technology behemoth and France, it was indeed, as Sarkozy put it “pas rien” that this press event took place. In the 55-minute film of the event (all in French, link above), the discussion touches upon important issues beyond technology, including French perceptions of success, the American university system, and France’s place in the global context. 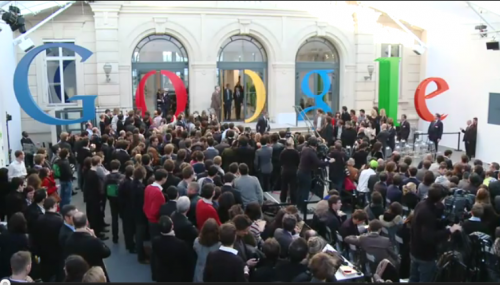 In addition to covering the French market, the new headquarters will also serve as Google’s center of operations for southern Europe, Africa, and the Middle East. If you’re curious about the complex itself, Le Figaro has you covered with a video tour.

Note: If you’d like to show only an excerpt of this video (or any video), try the SnipSnip tool. You just plug in the time stamp of where you’d like the excerpt to begin and end and voilà.

← Where is French really spoken? Mapping Twitter use by language
The future, as it was: France, en l’an 2000 →