Patrick Weil, a research fellow at the CNRS and also a former professor of mine, has just published an essay entitled Etre français, les quatre piliers de la nationalité (Editions de l’Aube, January 2011). Although I haven’t yet had the chance to read it, an abstract describes his conjecture that French nationality is based on “the principle of equality, the French language, the positive memory of the French Revolution, and the principle of laïcité.” Scholars of modern France are unlikely surprised by Weil’s choices, but a century ago, even a steadfastly secular republican historian would choose differently. One of the primary projects I’ve set for the civilization course I’m teaching is to figure out where these notions came from; to trace the evolving conception of French nationhood and citizenship from the Third Republic to the present. 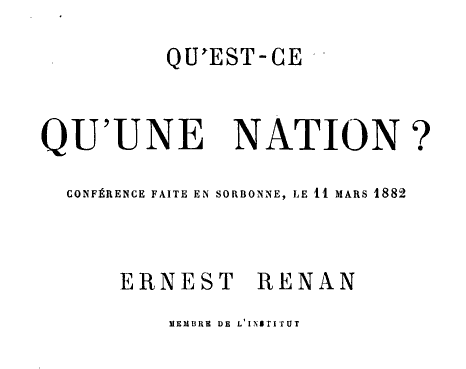 The first reading assignment I gave this semester was Ernest Renan’s lecture, delivered at the Sorbonne on 11 March 1882, entitled Qu’est-ce qu’une nation? (I had the students read it on Google Books in the interest of simplicity and consuming less paper – more to come on using digital manuscripts in the classroom.) It’s an excellent example of Third Republicanism taking a direct attack against contemporary studies (often German, although there are plenty of French examples) of race-based nationhood.

The lecture is divided into three parts following an introduction exploring the various forms of social organization (from tribes to empires) that exist and have existed on Earth. In class, we began with a short discussion of the author’s project, to define the nation in its specificity with regards to these other social forms. After remarking that Renan spends the majority of the time describing what the nation is not, we made a list on the board of characteristics that do not apply to nationhood in Renan’s view. These include race, language, religion, a community of interests, and geography. We discussed his reasons for rejecting these would-be markers of nationhood and Renan’s use of history to support his arguments.

Finally, we identified what in fact does constitute a nation in Renan’s lecture: “une âme, un principe spirituel,” a memory of a shared past and a desire to live together. The focus is on the people, and on suffrage to settle border disputes, which is particularly relevant to the trauma of losing most of Alsace and Lorraine after the Franco-Prussian War.

By divorcing the idea of nationhood from those of race, religion, or geography, Renan provides a strong basis for colorblind and geographically extensive citizenship, which, for better or worse, we’ll see reflected in the French conception of colonial empire as well as today’s approach – vastly different from the path taken in the U.S. – to ethnic differences within the nation itself. But to return to Weil’s “four pillars,” we now also see among many contemporary political thinkers the addition of the French language and an active movement of secularism to this concept of French nationhood. À suivre…