Sometimes the objectives of a course require the viewing of a full-length film in class. For example, in a writing class I have used La Fille sur le pont (1999) and Vipère au poing (2004) as the basis for an assignment on writing a critical review. But in the language classroom, where it’s more effective for the course objectives to spend the class time divided into different 15- or 20-minute activities, film shorts are a great way to incorporate multimedia materials without sacrificing too much precious class time. 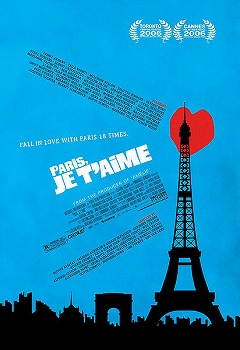 One obvious candidate for shorter clips is Paris je t’aime (2006), which is made up of eighteen shorts, each one set in a different arrondissement and each one the work of different directors (twenty-two in all). In an intermediate language course, I used three clips:

Quais de Seine (~6 minutes): In this story, a group of young men (François and two friends) taunt young women walking along the quai – a major social meeting spot for summer picnics and late-night dancing. When a young Muslim woman, Zarka, trips and falls, François comes to her aid and befriends her. Meeting up with her later in front of the Institut du Monde Arab, François chats with Zarka and her grandfather. François is a student of history; Zarka of journalism. Her grandfather has the last line of the short, saying, “elle veut parler de la France…mais de sa France à elle.”

Tuileries (~6 minutes): Set in the Tuileries Métro station, this film short addresses the stereotypes of French love and the all-important rule of avoiding eye contact. An American tourist falls victim first to the latter, and then to the former.

Porte de Choisy (~5 minutes): A short broadway-esque production set in Paris’s Chinatown, this film takes place in the 13th arrondissement and follows a salesman, Mr. Henny, peddling beauty products for “Asian hair problems.” The manager of one salon declares “le problème, c’est toi.” He is then better received for tea in another salon, where we learn a play on words: “Henny” – “ai ni” – means “je t’aime” in Cantonese.

These are all short enough to show more than once in class, and the beauty of this collection of films is that each one is a complete story in itself. The “lessons” or themes treated in each short are certainly not overly sophisticated, but they are a good entry into many issues in contemporary France. In the intermediate course, I had students write their biweekly composition choosing one of the shorts and discussing its view on a particular aspect of contemporary French culture. The students seemed to enjoy the films and did quite well reflecting on them in their written work.

Psst – you can find a lot of these shorts on YouTube.