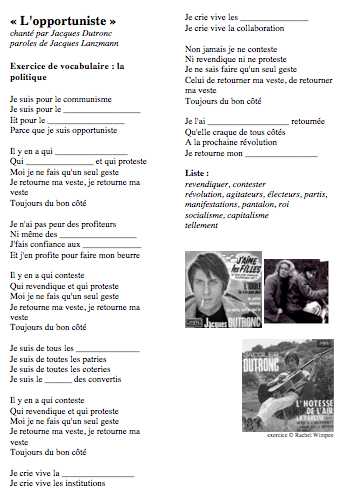 I was living in France in 1999-2000 when the millennium was all the rage. On the occasion of the turn of the new century (yes, a year early), I picked up a copy of a compilation CD called Les plus grandes chansons du siècle. I still have it and indeed, it has many classics, one of which is Dutronc’s “L’opportuniste.” It’s a catchy song from the ’60s generation that I’ve used in chapters on politics or in the context of mai ’68. Because of so many cognates, the lyrics are easy enough to follow in even an elementary 2 class.

My intermediate students have enjoyed the song and found the ending quite funny. (It’s momentous when you know enough French to understand a joke in the language.) The concept translates well to our term “turncoat.”

Download the cloze exercise as a pdf by clicking below:

(As always, check YouTube for a video version of the song if you’re having trouble finding an mp3. I checked Amazon and iTunes but couldn’t find more than a karaoke version. )